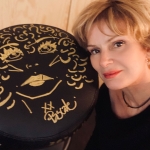 Bids are exclusive of 15% auction fee, shipping and resale. There is no extra charges. No VAT will be charged. Bids are binding.

Pascale Platel is a Belgian dancer, actress, author and model, who is mainly active in youth theatre. Platel studied publicity photography for a year at the Sint-Lucas Institute. She then studied for three years at the Higher Institute for Business Training and Public Relations (HIBO), where she obtained her degree in Applied Communication. Afterwards, she studied criminology for another year.

Together with her brother Alain, she founded the dance and theater company Les Ballets C de la B, where she danced in several productions. She wrote several plays for theater and produced or directed some of them.

Platel is also known for her column in the Belgian television program The Last Show. In 2008, she extensively reported on her visit to a campsite in the One program 1000 suns and shrimps every week and participated in an experiment in the discussion program Volt. She also appeared in the LUX program (with radio operator Luc Janssen), where she talked about her great role models, sources of inspiration and the female icon.

In 2009 she played a leading role as Sofia Mann in the series Jes on VTM. She also appeared several times as a candidate in Frieda's class and as a jury member in May I kiss you?.

Brought to you by: Private sale verified by auctioneer
Free collection at the auctioneer in Gent, België.

Ask a question to our auctioneer